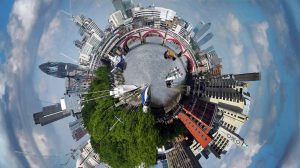 Virtual On is a VR production company that specialises in high quality 360 Virtual Reality video content. Each video content is created according to our customer’s needs. This is a new, attractive and unique way to show your products or to give information. 3D Virtual Reality & 360 Videos allow you to have an experience within a simulated environment, which can be from the real world to a completely different, simulated and impressive one.
The application of Virtual Reality technology is being used increasingly not only for video games, but also for product presentations or to give a unique and immersive experience to fully engage customers or visitors. Some of our customers have used our Virtual Reality Production Company or virtual reality agency, to create videos with educational purposes such as medical training.

Virtual Reality video or 360 video content can be viewed using Virtual Reality devices such as glasses set as Oculus Rift for heavy and complex content or Samsung Gear VR, Google Cardboard in which you simply insert a mobile phone and they can instantly access not only to content but to visualise directly without cables or external processors. Virtual Reality systems can also be viewed across multiple digital platforms such as smartphones, tablets, your website and social media channels.

Virtual Reality is quickly grabbing the attention of a multitude of industries who are founding the potential of this cutting edge technology. Among VR companies, Virtual On is a leader Mixed Reality, VR production company and VR app development. Combining the virtual reality equipment with a nice and cool Virtual Reality & 360 Videos, the audience is able not only to look and move around, but also to interact with virtual items.

Virtual On has been a huge help providing a holographic solution for our event ” Kew Science Festival”. They provided a high quality display and quick and friendly service exceeding all of my expectations.

We were looking for a really eye catching display for the launching of our new perfume. Virtual On came through google and has provided a fantastic service, quick response times and amazing displays. Highly recommended.

Why Use 360 VR Video Content Production to Promote Your Business and VR application?

What really is the difference between XR and AR MR VR?

As in maths, the ‘X‘ in XR is a variable that can stand for any letter. Virtual Reality (VR), Mixed Reality (MR), Augmented Reality (AR) generated content on the real world that can interact with the environment in real-time.

What is VR video format?

The most used format is MP4 or MKV. These formats can be seen from YouTube VR videos or Facebook 360 videos. You can also watch 4K 360 video online with flash video format like FLV, WebM, MPEG, etc.

In few words, virtual reality is experienced as 3D images or 360-degree videos. However, more elaborate VR systems use computer displays or even an entire room to create the illusion of being in situ.

What are the 3 types of VR?

No, you should be careful as it can cause damage in the person or object and also can break the display. We recommend to place it in a high place.

What the purpose of virtual reality is?

The purpose of VR is to create immersive experiences in order to help educate or entertain consumers.

Why is VR not suitable for under 12?

Some VR headset should not be used by children under the age of 12. The product may contain small parts, it is always advisable to have an adult with the child.

How long can you stay in VR?

The recommended time is 30 minutes in VR, more than this can cause you to lose spatial awareness of the room around you. After that, it becomes much more difficult to identify where things are in the real world.

Does VR mess with your brain?

One of the features of Virtual Reality is to trick your mind into believing things you see in a VR world to be real. Some claim that can cause several psychological effects and neurons responsible for memory creation are reportedly disturbed during a VR session.

Is VR getting cheaper?

Every year PC-based VR gaming is becoming more affordable. Also Mobile VR can offer the same experiences, maybe not with the same quality, but there’s still plenty of games and video content to try out.

Is VR worth getting?

Some of the best games this generation, innovative controls, and a well-supported ecosystem of VR development, this is a great and unique way to enter the virtual world.

Is VR box harmful for eyes?

Some suggest that only those suffering of weak eye movement and control are likely to experience adverse effects such as headaches and eyestrain.

Can VR be harmful?

One of the dangers can be injuries caused by blundering into objects while using the VR. Other side effects after using the device for a long period of time can be headaches, eye strain, dizziness or nausea.

What is VR good for?

No, you should be careful as it can cause damage in the person or object and also can break the display. We recommend to place it in a high place.

What a VR set is and how does it work?

A VR headset is a device used as a head-mounted that immerse the users in a virtual world.

Our eyes and ears work a similar whether we are in a genuine world or a virtual one. At the point when we reproduce the manner in which we experience this present reality—for example, by reenacting three-dimensional scenes utilizing stereoscopic vision—VR can cause us to feel like as though we are in an alternate world through and through, yet an exceptionally reasonable inclination one

What VR purpose is?

The purpose of Virtual Reality is to create an immersive world which can be used to educate or to entertain consumers.

What is Virtual Reality or VR?

Augmented Reality (VR) is the utilisation of PC technology to make a situation, but not in the real world.

What VR is and how does it work?

Virtual Reality (VR) is a user interface that not as the conventional one, immersed a person in a digital 3D environment. Using computer-generated content, it makes the user feel as he or she is in that world through the senses (sight, hearing, touch).

What is VR Virtual Reality

What VR Virtual Reality is, is a 3D environment created digitally that can be explored and interacted by a person using specific headsets known as VR glasses. This person or video presentation becomes part of the environment and is able to interact with objects or even perform certain actions.